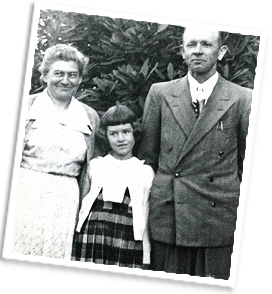 It’s been more than half a century since a family was brutally murdered in their own home in a quiet Vancouver neighbourhood, and today there are still far more questions than answers. Why was this family targeted? Who would savagely beat a young girl to death as she lay sleeping in her bed?

David and Helen Pauls were both in their teens when their families emigrated from Russia to Canada. During their 16 years of marriage, they lived in Saskatchewan and Aldergrove, before buying a home in Vancouver in September of 1956. The couple and their 11-year-old daughter lived in a house in the 1000 block of E. 53rd Avenue.

The family seemed to live a fairly ordinary life. David worked in the warehouse of the downtown Woodward’s store and Helen worked evenings at the Home Fancy Sausage Shop on East Hastings Street. Little Dorothy was in Grade 6 at Walter Moberly School, where her fellow students described her as quiet.

In today’s world of crime scene investigation, with modern tools like DNA testing, this crime might well have been easily solved. But in 1958, it was a very different situation.

What investigators know for sure is that three people were murdered during the evening of June 10th to the early morning hours of June 11th.

It was about 11:30 p.m. on the 10th when 53-year-old David Pauls left his residence to pick up his wife at the bus stop after she finished work. He was surprised by an attacker just outside the rear basement door, who shot him in the head, and then used David’s keys to enter the house. Mr. Pauls was seriously injured, but not fatally wounded.

Little Dorothy Pauls was asleep in her upstairs bedroom when the suspect entered her room, bludgeoned her, and ended her young life.

Back downstairs, the killer dragged Mr. Pauls into the basement, beat him and shot him twice in the head, killing him.

The suspect went back upstairs again, removed Dorothy’s pyjama bottoms and left them on the floor beside the bed.

Helen Pauls, aged 47, returned to the house after finishing work at 11:30 p.m. A witness reported seeing her running home from the bus stop, as it was raining and her husband clearly never made it to pick her up. She was shot and beaten to death in the front hallway. She still had her house keys in her pocket.

The specific weapons were never identified with any certainty. A heavy instrument of some kind was used to beat the victims. The bullets recovered from the bodies were sent to more than one lab, which concluded they came from a .22 calibre revolver – likely a Rohm RG-10, colt-style, six-shot.

Many theories have been discussed and pursued. Detectives considered that Dorothy may have been the target and that the crime was sexually motivated, but there was no evidence that the girl was sexually assaulted.

Robbery was a possibility – David’s wallet, and keys for the house and his vehicle, were taken. Helen’s purse was opened, but it’s not known if anything was missing.

There was even discussion that the murders may have been related to political unrest from their home country of Russia. The Pauls were Mennonite and rumours circulated when the church community would not cooperate with the investigation.

This case has frustrated investigators for decades and the Pauls family deserves justice. It’s been almost 60 years, but someone out there knows something.

This is an ongoing file. Please check back regularly for updates.